The 2015 wave of refugees had touched me too and I wanted to help. After I visited refugees in Austria with my dog and found out that they are absolutely friendly to animals, contrary to the widespread image, I decided to act according to the principle: „A cobbler should stick to his last“. German lessons and donations, that I had already done was not really what I wanted to do. And my animal welfare association Robin Hood is always helping in the countries themselves, trying to make a change there. In Romania, Hungary, Armenia, Siberia, Greenland and recently in Iraq.

I wanted to help the refugees escaping with their animals and met Dr.Salaiman Tamer Saed with his association KOARP, Kurdish Organization for Animal Rights Protection. With him I was traveling for a week and was allowed to experience the hospitality of his family and the Kurds in general.

Sulaiman impressed me a lot and also the Kurds in general. Sulaiman is fighting for the animals day by day; with the help of Robin Hood he can buy food and everything necessary. He visits schools and also visits the zoo with the children. He lectures at the universities.

Sulaiman and I will hold workshops for pet store owners and animal markets.

We want a ban on wild caughts (removal of wild animals from nature).
We are working on an animal welfare law for the region.

Kurdistan in Iraq has inspired me, in spite of war and danger. I’ll be back, because animal welfare is borderless and must also overcome wars.

News from the Project 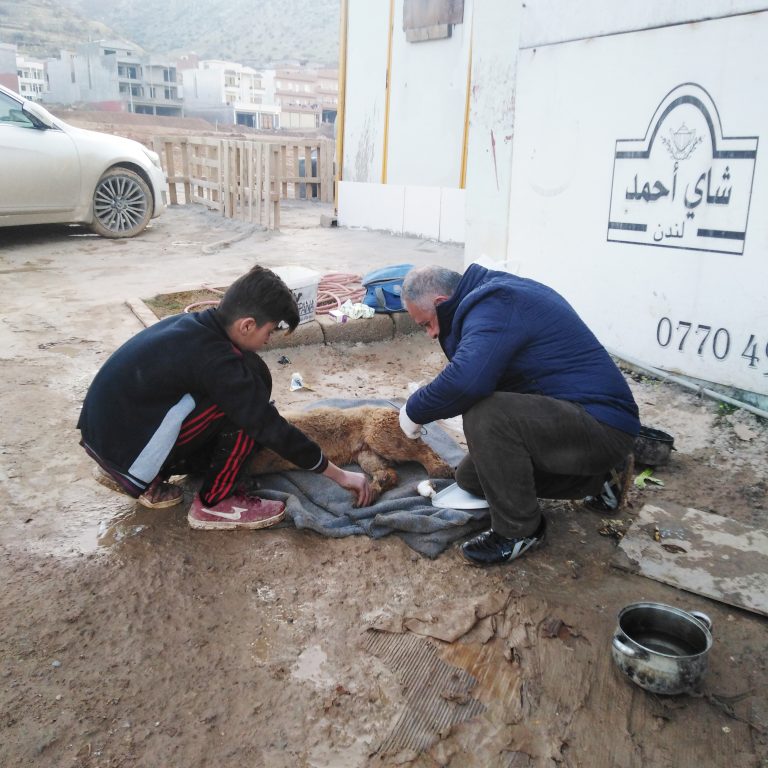 Iraq: We came to stay

That means that Robin Hood not only helps when it is acute, no, we help permanently and in countries where animal welfare is still a

Personal meeting with Dr.Sulaiman Tamer Saed, who is our project partner on site

The feedings of the strays continue.

Sulaiman and Robin Hood helped with food and the cleaning of the enclosures for the remaining bears and lions in the zoo of Mossul.

Another animal welfare organization could later bring them out of the country.

Flyers on animal welfare are distributed, animals are released from the animal market and liberated.

Humans and animals are refugees in Kurdish Iraq.

Sulaiman and his organization KOARP and also Robin Hood are helping.

100 water troughs and water are brought here. Without them these animals would have died.